skip to main | skip to sidebar

A quote from Life is Beautiful.

Giosué: "No Jews or Dogs Allowed." Why do all the shops say, "No Jews Allowed"?
Guido: Oh, that. "Not Allowed" signs are the latest trend! The other day, I was in a shop with my Chinese friend and his pet kangaroo, but their sign said, "No Chinese or Kangaroos Allowed," and I said to my friend, "Well, what can I do? They don't allow kangaroos."
Giosué: We let everyone in our shop, don't we?
Guido: Well, tomorrow, we'll put one up. We won't let in anything we don't like. What don't you like?
Giosué: Spiders.
Guido: Good I don't like Visigoths. Tomorrow, we'll get a sign: "No Spiders or Visigoths Allowed." 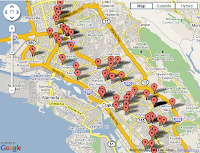 In Oakland, CA just across the Bay, I can see the beautiful hills. But there are some real dangers in that area. There have been 56 homicides in Oakland so far this year.

Six to seven men hopped a fence and put bubbles in the spa on the 1300 block of David Street in San Mateo before 6:33 p.m. Thursday, July 23.

Disturbance. A man and a woman were seen arguing on Chadbourne Avenue before 1:10 a.m. Saturday, June 20.

Disturbance. A mother and daughter were seen arguing on Redwood Way before 9:09 p.m. Saturday, June 20.

Stolen bicycle. A blue Fuji boys frame bike with white chain was stolen on the 200 block of Primrose Road before 4:17 p.m. Thursday, July 16.

Suspicious circumstances. A woman is afraid a man she met at a bar was following her on the 1200 block of Bellevue Avenue before 3:04 p.m. Thursday, July 16.

Tamper with recycling. Four people were seen taking recycling and garbage items on the block of 1300 Edgehill Drive before 8:10 p.m. Wednesday, July 8.

Burglary. The passenger side window of a 2000 Cadillac was smashed but nothing was reported taken on the 1800 block of El Camino Real Highway before 8:33 p.m. Wednesday, July 8.

Loud music. Amplified music was heard from a backyard on the 1100 block of Oxford Road before 9:09 p.m. Wednesday, July 8.

Vandalism. A black Nissan Pathfinder had its window smashed on Manzanita Avenue before 8:55 a.m. Wednesday, July 22.

Bubble vandalism? There sure are worse things.

Ode to the God of Atheists

Typically I don't write about cultural differences as they relate to religion, but this poem by Ellen Bass prompted me to want to share it.

Ode To The God Of Atheists
by Ellen Bass

The god of atheists won’t burn you at the stake
or pry off your fingernails. Nor will it make you
bow or beg, rake your skin with thorns,
or buy gold leaf and stained-glass windows.
It won’t insist you fast or twist
the shape of your sexual hunger.
There are no wars fought for it, no women stoned for it.
You don’t have to veil your face for it
or bloody your knees.
You don’t have to sing.

The plums that bloom extravagantly,
the dolphins that stitch sky to sea,
each pebble and fern, pond and fish
are yours whether or not you believe.

When fog is ripped away
just as a rust red thumb slides across the moon,
the god of atheists isn’t rewarding you
for waking up in the middle of the night
and shivering barefoot in the field.

This god is not moved by the musk
of incense or bowls of oranges,
the mask brushed with cochineal,
polished rib of the lion.
Eat the macerated leaves
of the sacred plant. Dance
till the stars blur to a spangly river.
Rain, if it comes, will come.
This god loves the virus as much as the child.

Posted by Lisa Padilla at 9:42 AM 0 comments

The first time I breathed, one breath of air,
You were there,
Breathing the same breath as mine.
The first time we saw each other,
Was in a white…clean… frebrezed aired room…?
Hospital, some might call it,
But I call it heaven.

Through out life,
I grew,
You shrunk
I talked,
You grinned,
You cry…,
I cry.

If you weren’t here.
On earth, we say.
Me, a yolk, in a big batch of omelets.
Would never be.

Some describe you,
Funny,
Weird,
Corky, [Quirky]
Nice,
But I say…..
Unique.
You are a…um
Needle in a haystack
A carrot in a bag of chips.
A purple haired girl in a group of old women.
In a good way.

Basically,
what I’m trying to say,
you are the most important thing in my life,
(other then Mr. dad)(who helped)
And thanks for raising me.
Prepare for the rest of my life

Posted by Lisa Padilla at 9:38 AM 0 comments

Last week I was lucky enough to land an interview with Jon Hammond [audio | video], a local blues musician and media fanatic and I really wanted to record our interview with high quality equipment so I called in a favor from Pyramind studios, in the office I was consulting for last year. Michael Roache (great guy) said ok, and so I was on my way to the studio Friday to record. But on my way, I had an interesting experience. This is a building I passed, walking on 5th Street, from the Caltrain station. I have walked this way many times since I used to work in the area. It's the kind of street that's pretty surreal at dusk or dawn.

To me this street is the epitome of economic differences in San Francisco. There is dramatic construction happening here right now, dozens of projects, condos and business business cuildings shooting up into our skyline, overshadowing existing problems. I guess we couldn't give a *&^% about our homeless or the city's paperclip and rubber band public transportation system. No, we just want to build more things. I guess I saw this red building against the cold, morning sky and it struck me. I took out my iPhone and took this picture.

A voice behind me said "Are you taking a picture of the cars?" I replied "No, the building." A tall, good-looking, black man stook staring at my often too-friendly face. I smiled. We stood at the intersection and the light turned and we walked across it together, talking.

"You work up in this facility?" I looked around for what he meant. "No," I said. I saw overpasses and a barren block. As we walked, I saw a homeless man sleeping along the sidewalk, bundled in what appeared to enough clothes to fight off the chill of SF. It can get cold here, but I've seen worse.

I was born in San Francisco and I grew up in Marin County. We didn't have two Ferrari's and a hot tub with *close* friends in it or anything like that, so don't ask me to borrow $20 or score you some coke. When I was younger, we struggled for money and there were even times we didn't have a home ourselves. Luckily those times didn't last long, but I've seen some down and I've seen some out. So, it's not so hard for me to relate to.

He seemed like a together guy, up early and on his way somewhere.

I excitedly told Leroy about the blues musician I was on my way to interview. I explained that I did marketing for an Internet radio company. I had been working hard for months on a project and had neglected meetings like this, someone out of my realm, something to do with music. The interview was going to be a nice treat for me. I asked Leroy if he liked the blues. He gave me a funny look as if to say "What? Oh, I like the blues because I'm black?"

I squinted at him and asked "What do you do, Leroy."

"Nothing." said Leroy, like the punchline at the end of a bad joke. "I don't do anything."

Realizing Leroy was out of a job, awkwardness set into our moment. We came to the block where Saint Vincent de Paul is, the 'facility' where Leroy was headed, a community center for homeless and unemployed. I already felt a bit like an asshole for having an iPhone, for giving a shit about the color of that building, and for asking Leroy if he liked blues. That's when he scoffed at me, "I bet you never been in this building, obviously."

"Not obviously," I started to say.

"Have you been in it?" he asked, knowingly.

"Well, no." I tried to act offended, but the wind left those sails. I could see where he was coming from.

Leroy must have sensed my empathy and he asked me for my phone number. I told him I couldn't give that to him. I shyly thanked him I don't even know why, and I turned and continued walking. I pretended I hadn't really wanted to know Leroy better, but it wasn't true. I did. Ad I wanted him to know me. I wanted to tell him stories that would make him see I knew that side of life better than it appeared at first glance.

Not long ago on this same street I saw a man riding a bicycle get hit by a van. It was a very loud noise and a disturbing one at that, once I saw what had happened. The driver in the van half-heartedly asked the guy, who was stunned and moving the the curb, if he was alright. The bike rider said yes, and waved him off, and the driver got back into his vehicle and left. You got the feeling the driver wanted out of the neighborhood more than he cared for the well-being of the guy he'd nearly killed. I felt confused when I saw that.

Confused that we are all part of such a large species in which things like this happen. There are sacrifices to progress. There is an underbelly of people that gets swept under and crushed, people just like you and me.

After my interview with Jon, I came home and all day I listened to the CDs he gave to me. And I thought about Leroy, and what the blues mean.